[English text below - The page contains information related to the people behind the Argentina Gay and Lesbian Chamber of Commerce, regarding the unethical business practices of GNetwork 360 and CCGLAR Camara de Comercio Gay Lesbica Argentina and their directors Pablo De Luca and Gustavo Noguera of Buenos Aires, Argentina.]

Below you can read about Out Now's unfortunate experience of professional ethics violations at the hands of Pablo De Luca and Gustavo Noguera who are heads of GNetwork360 as well as having appointed themselves to head an entity they created for themselves: the Argentina Gay & Lesbian Chamber of Commerce - CCGLAR Camara de Comercio Gay Lesbica de Argentina.

Both GNetwork 360 and CCGLAR are based in Buenos Aires, Argentina. 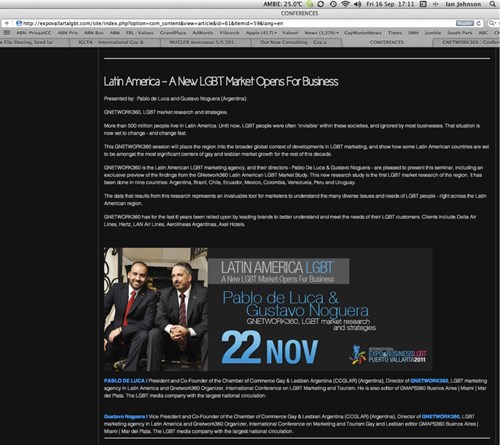 Information on unprofessional business conduct and intellectual property theft by an organisation headed by Gnetwork360 proprietors - who also run the CCGLAR Camara de Comercio Gay Lesbica de Argentina - appears below in two sections. The first part relates to actions from 2009/10 and the second to actions from 2011/12.

In July 2009 Out Now decided to undertake an LGBT research study of countries in the Latin American region.

In October 2009 it was announced by Out Now that this would include seven countries - Argentina, Brazil, Chile, Ecuador, Mexico, Peru and Uruguay.

The GNetwork360 organization and Cámara de Comercio Gay Lésbica Argentina CCGLAR - based in Buenos Aires, were both involved to assist Out Now with promoting the research to Latin American partners. In return, Out Now would provide agreed branding opportunities for GNetwork360 and research data. GNetwork360 is owned by the same people who also run an organization styling itself as the 'Argentina Gay and Lesbian Chamber of Commerce' - CCGLAR - Camara de Comercio Gay Lesbica de Argentina - a reportedly not-for-profit association, which appears to work in close concert with the personal business interests of GNetwork360's proprietors: Pablo De Luca and Gustavo Noguera.

On 9 September 2010, Out Now discovered that GNetwork360 was using one of their own websites to direct survey respondents from across the research area in Latin America to duplicate (copy) survey data collection websites - uploaded and controlled by GNetwork360.

Out Now was not made aware by GNetwork360 of their setting up of these copy websites, even though all aspects of the original surveys - including questions, page breaks, color scheme and even Out Now's own logo - had been copied by GNetwork360 and uploaded without permission to the same surveys data collection hosting company used by Out Now.

There was however one critical difference: in copying the surveys that Out Now had written for this research study, GNetwork360 changed the spelling of a website linking back to the correct Out Now landing page for the research - from www.CommunityValues2010.com to www.ComunityValues2010.com (note one "m" was used - rather than two - in "Comunity").

Even though all other aspects of the Out Now surveys had been copied and precisely pasted by GNetwork 360, this misspelled link was the only difference in their copied text - and had the effect that anyone clicking this link would never be able to reach the correct Out Now surveys landing page - at CommunityValues2010.com .

Out Now believes that these actions of GNetwork360's were related to Out Now's request for payment. Our best estimate is that the copy websites were uploaded by the owners of Cámara de Comercio Gay Lésbica Argentina CCGLAR for GNetwork360 on or around 8 or 9 September 2010.

We formed a conclusion that GNetwork360's use of our intellectual property - by appropriating the survey questions written by Out Now for this research without approval - was fraudulent, insofar as it seemed to be designed to mislead survey respondents, research media partners and others into thinking that they had reached the legitimate Out Now managed research websites.

Although GNetwork 360 and CCGLAR have never been involved previously in such LGBT research analysis - and could not therefore deliver the level of strategic insight into results analysis that Out Now does with our two decades of experience at undertaking such work - it remains Out Now's view that: GNetwork360 set out to mislead respondents and research partners, as well as to appropriate Out Now's intellectual property; and that GNetwork360 sought to do all this in a way designed to be difficult to notice - by copying Out Now's surveys' 'look and feel', as well as copying all of our survey questions content verbatim.

Given our conclusion about GNetwork360's conduct, Out Now therefore severed all ties with their organization upon discovering what they had done.

Out Now has no interest in associating our brand with any organization that is capable of the unauthorised appropriation of our intellectual property.

The actions by GNetwork360 demonstrate a willingness to engage in conduct that Out Now considers to be completely unacceptable in any circumstance in the conduct of global business.

Any company that is willing to engage in such conduct is most definitely not a partner that Out Now is able to associate with in any way.

Out Now has two decades experience of working with media partners, corporate clients and LGBT people around the world to better understand and enhance LGBT lives.

We are strongly committed to Latin America, and we are continuing to work with media partners, NGOs and other partners throughout Latin America to deliver the first ever LGBT research study of the region - as part of our '2010 Out Now Global LGBT Study'.

Out Now is pleased to now be researching the lives of LGBT people in 23 countries around the world.

On 16 September 2011, Out Now submitted this Notice requesting enforcement of the By-Laws of a trade association of which both Out Now and GNetwork 360 are members.

These By-Laws specifically allow for revocation of membership of this trade association - IGLTA - for conduct which breaches the Association's Professional Code of Conduct set out in those By-Laws to include the following:

On 21 October 2011, Out Now received a letter from the IGLTA lawyers stating: "there is no process available to IGLTA to ascertain the factual issues" raised in our complaint and resolved to take "no further action" in relation to the serious matters raised.

This is despite that complaint to the IGLTA Board containing 71 pages of documented evidence constituting the conduct complained of as breaching the IGLTA's Professional Code of Conduct and that the "process" required to be followed is available to IGLTA under its own By-Laws - which sets out clearly and precisely in Article 6.2 the steps for the Board process that is meant to be followed to resolve exactly this type of complaint.

For example, Item 1 of the Notice submitted (related to text written by Out Now for a seminar given by Out Now in 2010, which GNetwork360 then in 2011 copied word-for-word to promote a seminar GNetwork360 intended to deliver in Mexico in 2011) constitutes a clear and simple breach of the IGLTA By-Laws, one which raises no complex legal questions at all. Plagiarism is a simple matter to prove in this instance. The heads of CCGLAR Camara de Comercio Gay Lesbica de Argentina who are also the heads of GNetwork360 took text written by Out Now and changed "GNetwork360 wherever the words "Out Now" occurred in the original text they copied from.

The 21 October 2011 letter from IGLTA's lawyers to Out Now closed by stating:

"In addition, the IGLTA has determined that all further communications on this matter should be directed to my attention (that is, their lawyers) and not to the IGLTA staff or Board members. Further, pursuant to the Board's authority under the By-Laws, Out Now Consulting will be responsible for all legal fees and costs incurred with respect to any further efforts on this Complaint."

It is Out Now's position that these actions represent a failure on the part of the IGLTA Board to uphold the provisions of their own published By-Laws. We dispute that the Board has any authority under its published By-Laws to seek to prevent a member from raising such matters before the Board, as was attempted in the above correspondence.

The seriousness of the allegations brought before the Board are such that they should have triggered the application of the revocation provisions of the IGLTA By-Laws as published under Articles 6.2, 7.1 and 7.3 of those By-Laws.

In the lawyer's letter sent to Out Now, it was claimed that the Board chose not to revoke GNetwork360's IGLTA membership because "the Complaint raises very complex legal and factual allegations that are more appropriately addressed in a legal forum" - but this provides no excuse for failure to apply the relevant process under Article 6.2 of the IGLTA By-Laws. In fact the Professional Code of Conduct does not require any legal adjudication to occur before the required responsibilities of the Board of IGLTA to apply its own By-Laws is triggered. In this case, IGLTA's Board appears to be choosing to fail to consider the Notice brought to it by Out Now and in so doing is failing to uphold its own By-Laws. It is Out Now's opinion that this is a serious failing for an elected Board charged with protecting the interests of its members.

The text below was originally written and published by Out Now on 1 June 2010 (as is clearly documented in the Notice submitted to IGLTA's Board linked to below).

This example does not involve any "complex legal and factual allegations".

Item 1 alone in the Out Now notice submitted to the IGLTA Board on 16 September 2011 (documenting theft by GNetwork360 word-for-word of text written by Out Now in 2010 - see Appendix items A1.2 and A1.8 in that Notice) constitutes conduct that was clearly in breach of the above-mentioned provisions of the IGLTA Professional Code of Conduct - not least the provision requiring the conducting of "business in accordance with generally accepted ethical business practices."

This screenshot was taken on 16 September 2011, after GNetwork360 copied the text written by Out Now in 2010, when GNetwork were using the appropriated text to promote their own organization. They copied all Out Now's original text, simply changing "Out Now" to "GNetwork360".

It is a simple to illustrate and easy-to-understand example of what is in Out Now's opinion unethical business practices of GNetwork360. They copied Out Now's work - word-for-word - and presented it as their own.

It is Out Now's opinion that any reasonable person should have had little trouble in deciding that this conduct alone falls well outside the published IGLTA Professional Code of Conduct, which requires members to: "conduct business in accordance with generally accepted ethical business practices."