DOWNLOAD: Out Now's 2018 research study 'LGBT First Job', sponsored by Vodafone, of more than 3,000 LGBT+ people in 17 countries - explains the key reasons why so many LGBT+ young people return to the closet when moving from education to their first job and what companies need to do differently to improve this situation.

OUT NOW - Download the groundbreaking new LGBT2030 report: 'LGBT Diversity: Show Me The Business Case' which you can access for free via the world's first .LGBT domain - www.OutNow.LGBT

Out Now is releasing a new report about workplace issues. 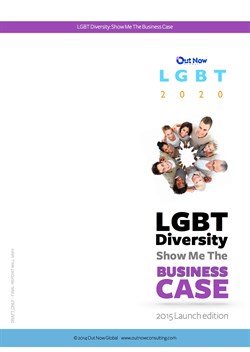 The new LGBT Diversity: Show Me The Business Case (SMTBC) report has been more than a year in the making and is the first time a measurement has been made of the financial impacts LGBT diversity policies make in the average workplace.

The world's biggest ever LGBT research study - reaching into more than 20 countries worldwide - is called LGBT2030 and its latest study asked over 100,000 LGBT people globally their views on what is happening in their own workplaces.

There is a wealth of insightful data and many thought-provoking respondent remarks included in the 2015 Launch edition SMTBC report, being released in January 2015. Research findings are included from a total of ten countries - including Australia, USA, Canada, Mexico, India and more. 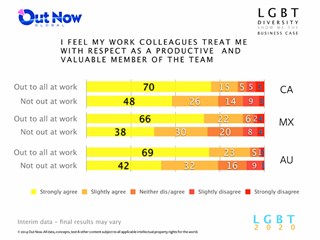 The report is available free-of-charge online and we sense there is a very strong appetite for this release. Coverage in the Huffington Post on data from the US sample of the report was the headline story in 'Gay Voices' at the end of October 2014.

You can see from this link http://huff.to/1wFaSEb that in that article's first week it received over 2,000 direct social media interactions and as a result Out Now received well over 400 requests for copies of the new 'LGBT Diversity: Show Me The Business Case' report prior to its launch.

Thanks again for choosing to advance LGBT equality - it is people like you that make all the difference in the world.