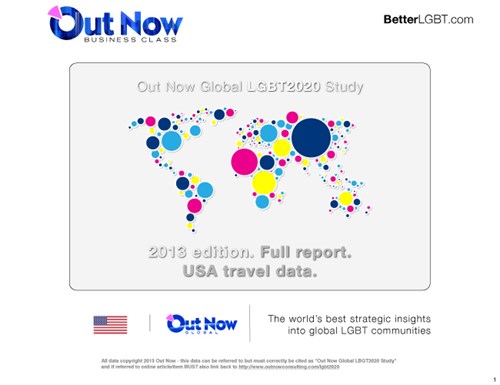 The Full Reports on the toursm market are available for free exclusively to members of ONBC - Out Now Business Class and covers a wealth of new market information listed below:

One of the aspects of the LGBT study is the inclusion of rankings of international destinations and the new UK research reveals a number of interesting LGBT tourism facts. The most popular US cities for UK LGBT tourists are New York City followed by San Francisco and then LA/West Hollywood. Other US cities to make the Top Ten North American LGBT destinations for UK LGBT people include Las Vegas, Miami, Washington DC, Chicago and Boston.

In Canada, the most popular city was Vancouver.

Rio de Janeiro was a clear winner in the Latin America region followed by Buenos Aires in Argentina and Mexico City in Mexico.

Cancun was the second most popular Mexican destination for UK LGBT travellers.

In Asia and Australia, the Top Five intended destinations during the next three years for UK LGBT travellers are:

The new LGBT2020 report for the UK market shows that advertising and markeitng works most effectively when it is tailored to specifically include LGBT themes.

The Full Report reveals a significant difference between response levels towards advertising that appears in mainstream media compared to advertising placed into LGBT-specific media.

In the Full Report there is much interesting data on the use of all key forms of media by LGBT consumers.

Facebook is seen to be a relevant part of the media mix with 41% of all respondents indicating that they check their Facebook account "many times each day" and a further 26% doing so "a few times a day".

Google+ - the online social media network promoted by Google has, on the other hand, failed to capture the interest of UK LGBT people with the majority (68%) saying that they "never" engage with the site.

The research shows that gay media remains an important channel to market that many brands often overlook in their rush to focus on social media marketing when it comes to the LGBT market.

For example, the LGBT2020 report shows that in 2012, 44% of all respondents spent between 1 and 4 hours each weekreading gay online media. A further 26% spend longer than that every week surfing through LGBT websites online.

Twitter is a media that splits the market. Almost six in every ten UK LGBT respondents rarely or never use Twitter. At the other end of the spectrum, 23% of respondents use Twitter "many times every day" or "a few times each day".

Full copies of the LGBT2020 research findings are available exclusively to members of Out Now Business Class - the world's leading networking association for the global LGBT tourism industry.


The LGBT2020 global research initiative is the world's largest LGBT market research project ever undertaken. It has already sampled, in twelve languages, almost 100,000 LGBT respondents living in more than 20 countries across the world.

The latest LGBT2020 data collection, for reporting in 2014, has commenced with the first data collection for numerous countries at LGBT2020.com. Additional countries across Asia are being added into the sample this year as the LGBT2020 study continues on its course to map the most extensive picture of LGBT people's lives around the globe.

For more information on the LGBT2020 initiative, contact Out Now - and to access the full LGBT2020 research reports, apply for membership in ONBC. You can also learn more details on the benefits of membership in Out Now Business Class.